Download and read the Holy Quran by Abdullah Yusuf Ali.

Muslim believe that the Holy Quran was revealed only in the original classical Arabic. 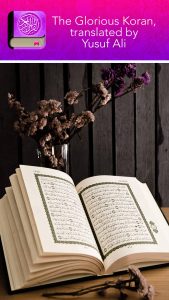 But the importance of Islam grows and translations are needed. This version, the Yusuf Ali Quran is the most faithful translation available in English.

Abdullah Yusuf Ali was an muslim scholar born in India who translated the Holy Quran into English.

When he was a child he received religious education, he studied English Literature and went to several European universities. He concentrate his efforts on the study of the Quran.

In 1934 he began to translate the Holy Quran which was published in 1938, in Lahore, India.